Salt Lake City, Utah and Craters of the Moon, Idaho

On Thursday morning we broke down camp and headed north on I-15 for the 300 mile drive to Salt Lake City, Utah, on the way to Craters of the Moon, Idaho.  While passing the best coffee on the interstate, we longingly wished we could have extended a mug to catch a gulp on the run! 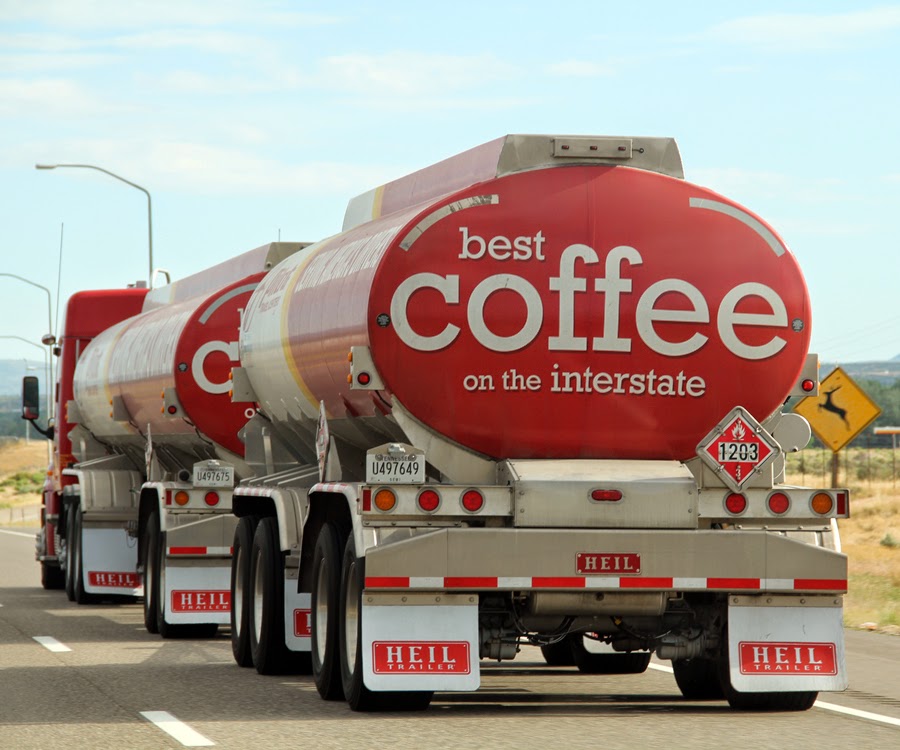 We arrived at Temple Square in Salt Lake City around noon, home to the LDS Church, and found ample two hour metered parking right across from the metro stop. 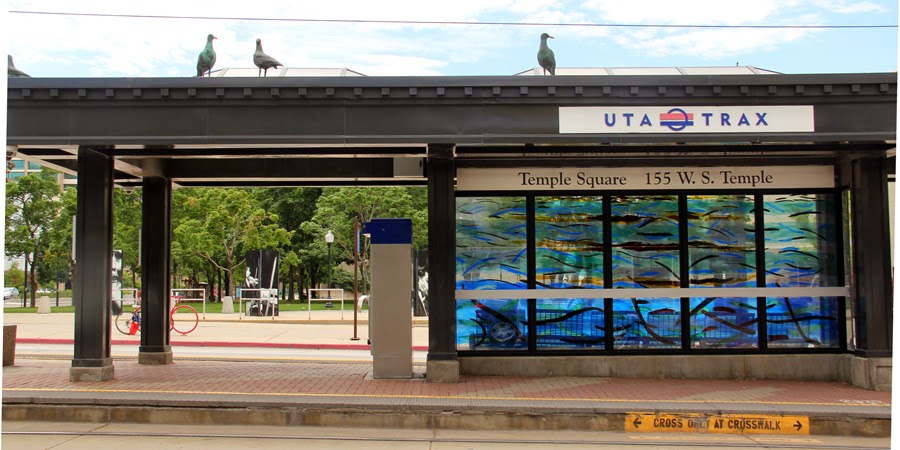 The first thing we noticed was how clean and beautifully maintained the city is. 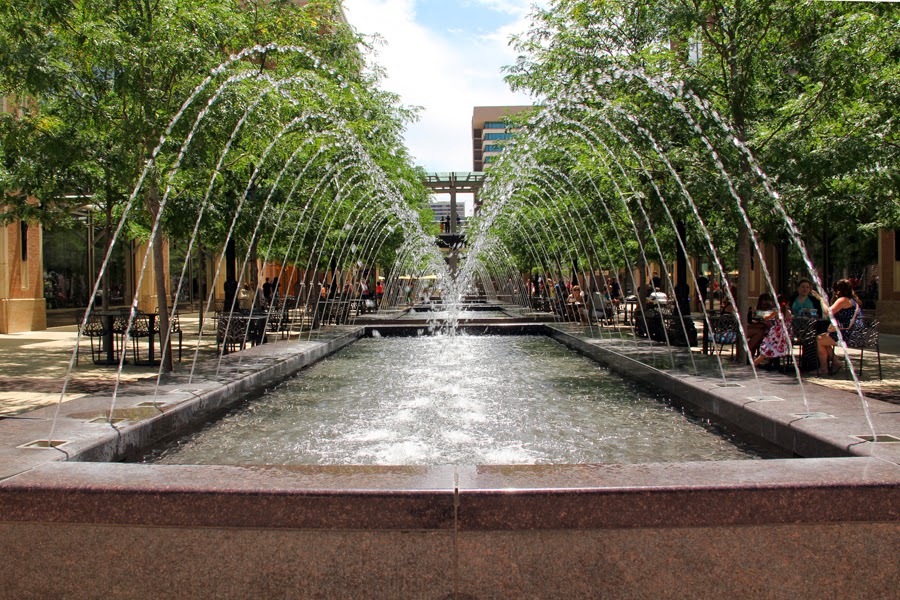 It was a short one block walk to Temple Square, and although their most sacred Temple was closed for the summer for maintenance and renovation, the Square was loaded with interesting buildings, offering free admission and tours given throughout the day by the "Sisters".  It was positively buzzing with activity.
The Sisters are a group of young women that come from around the world to participate in the mission program of the LDS church.  They are an adorable, irresistible group of ladies that have an infectious enthusiasm for what they are doing, and they made the tour a real pleasure.  The highlights for me were the beautiful organs both in the Tabernacle,
and in their fabulous Concert Center, where we were able to catch a free, world class organ rehearsal.
We had a late lunch after the concert, and then got back on I-15 and crossed the border, 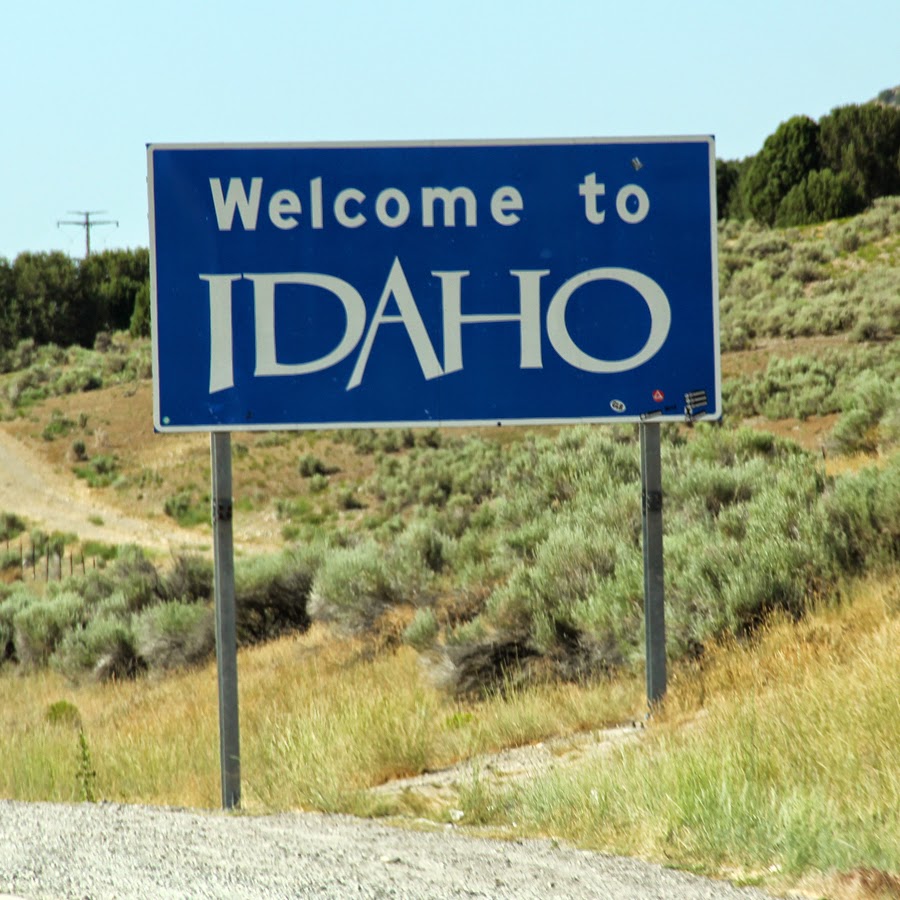 and found just the kind of sign I would expect to find in Idaho. 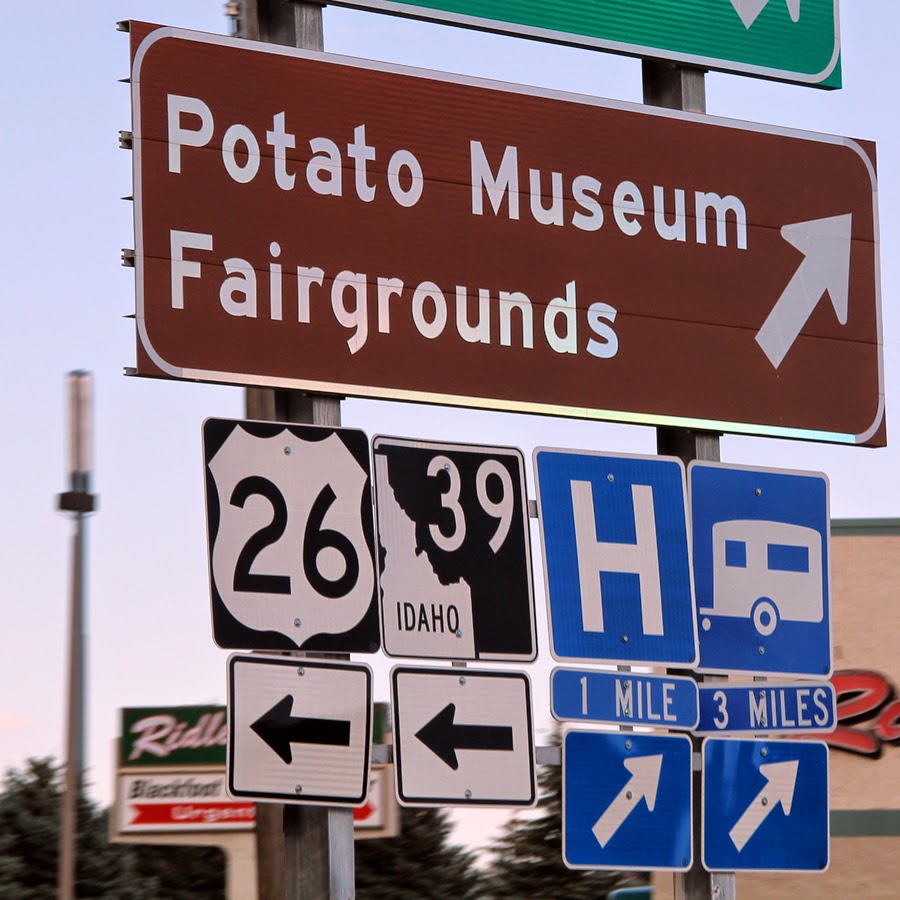 Unfortunately we had no time to linger at that point, so the Potato Museum would have to wait for another visit.  Instead, we headed for our final destination of Arco, home of Craters of the Moon National Monument. 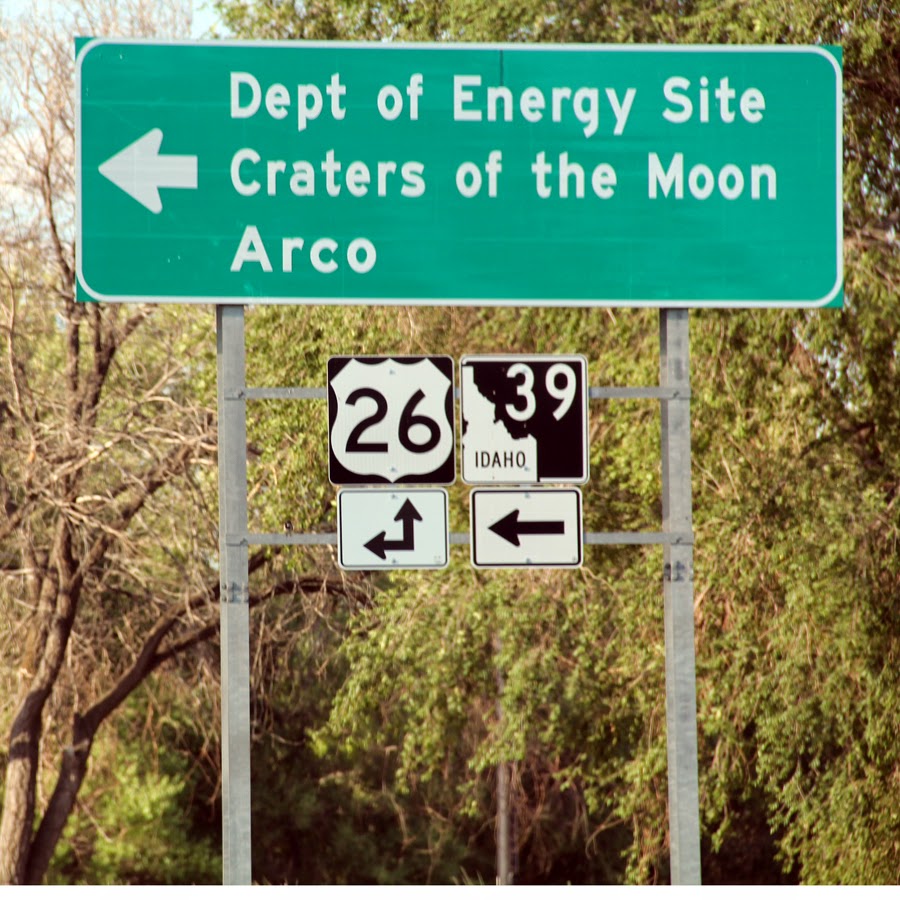 We chose Arco because it was a little more than halfway from Zion, Utah to Bozeman, Montana, our next stop, and we thought it would be an interesting location.  We discovered, however, that it was a little more off the main road than we anticipated, and turned out be almost a four hour drive from Salt Lake City, with the last hour and a half cutting through some pretty remote territory. 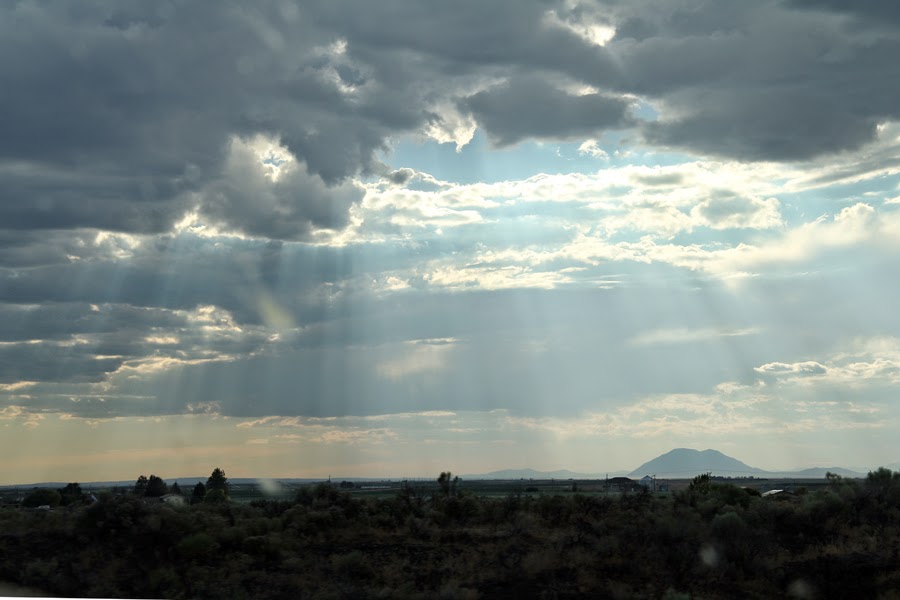 Although we followed the signs to Arco, we got a little nervous when our GPS landed us down a gravel road into the middle of a field.  We called our KOA Campground and she reassured us that we were close, and gave us another address.  She told us we would find them right behind "Pickles".  And so it was and so we did. 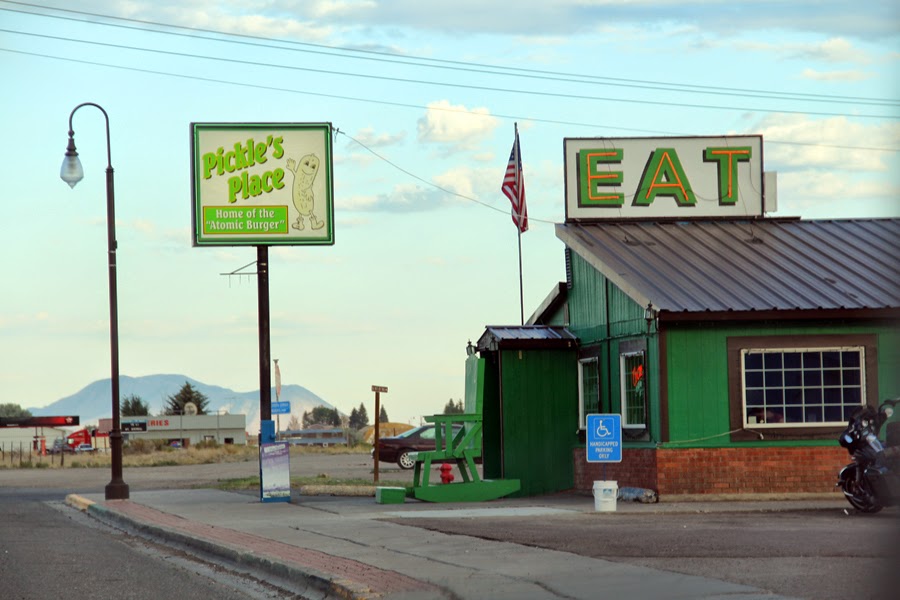 It was after 8 pm now, but it stays light in Arco until close to 10 pm this time of year, so light was not a problem for setting up camp.  The sprinklers on our site, however, were another story. 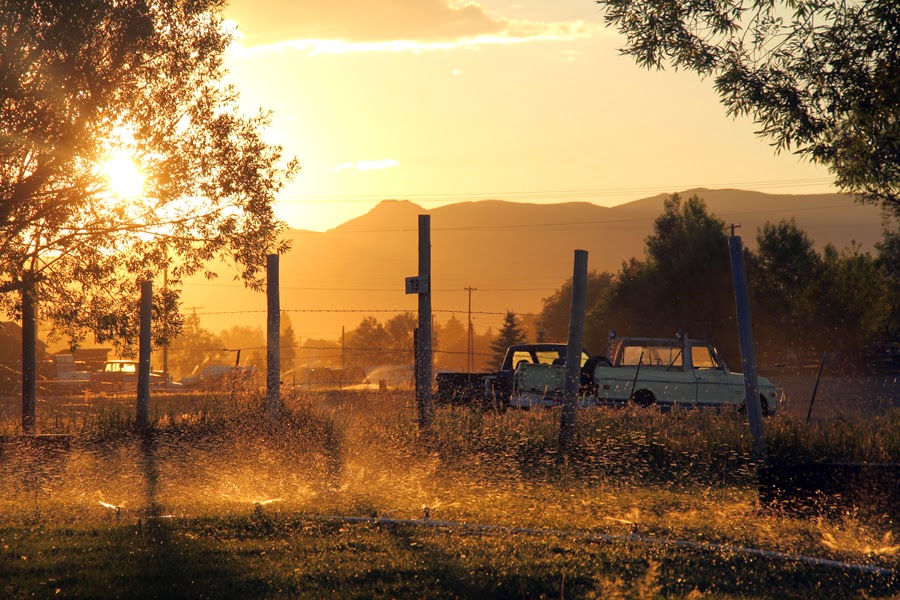 It was so darn pretty and peaceful, though, that it was hard to be mad, and the owner rode over on his little cart and fixed the problem for us right away.  The water dried quickly in the heat, and we set up camp as the full moon rose.
S'mores were the icing on the cake that evening, thanks to Lizz's ability to build a fire (again not one of my talents).  After that amazing treat I slept like a baby. 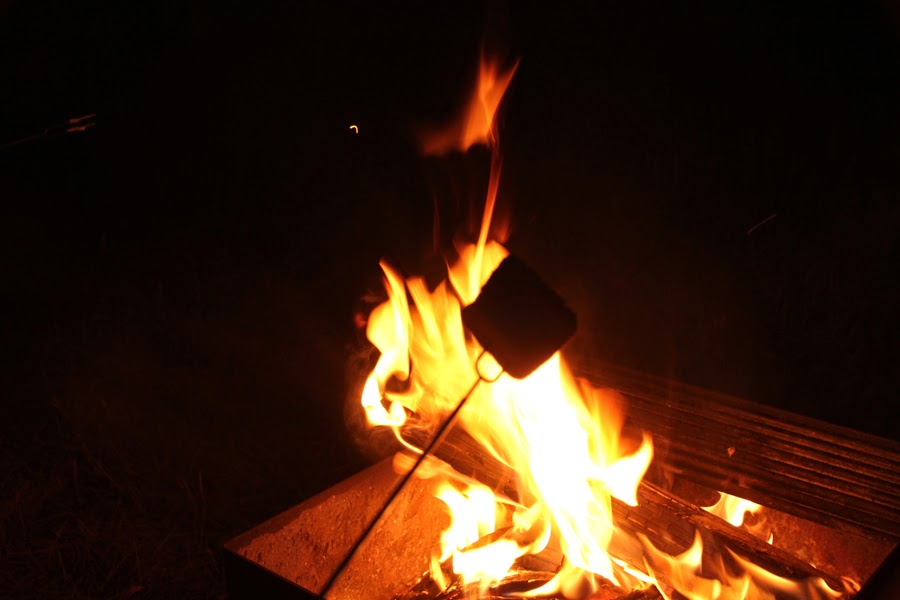 The next morning I awoke to find Lizz already up painting the scenery.  She will be offering all of her little paintings along the way for sale, and you can email her at lizz@etuckerart.com if you would like to see them! 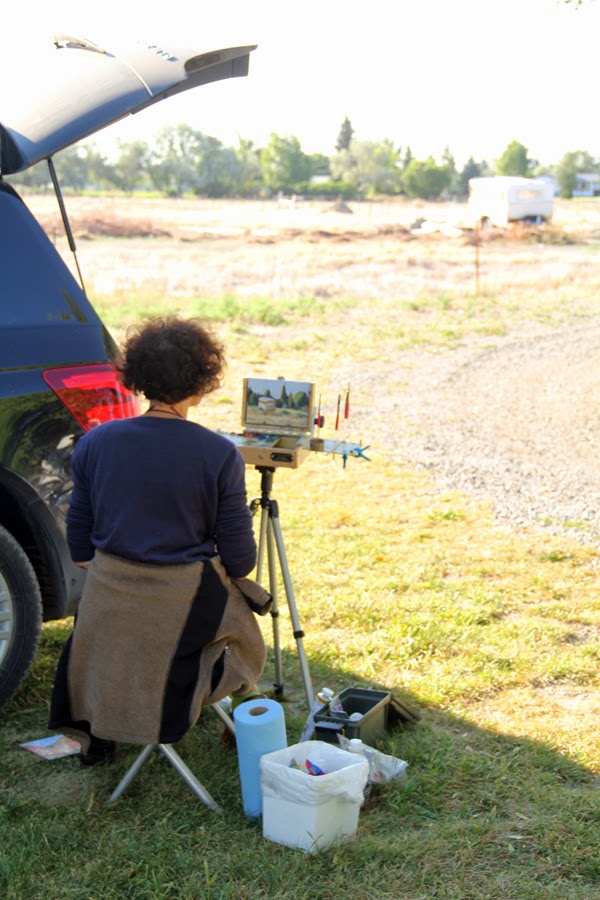 This offered me the chance to have a leisurely cup of coffee and some oatmeal before taking the trip to Craters of the Moon National Monument, about a twenty minute drive from the campgrounds. 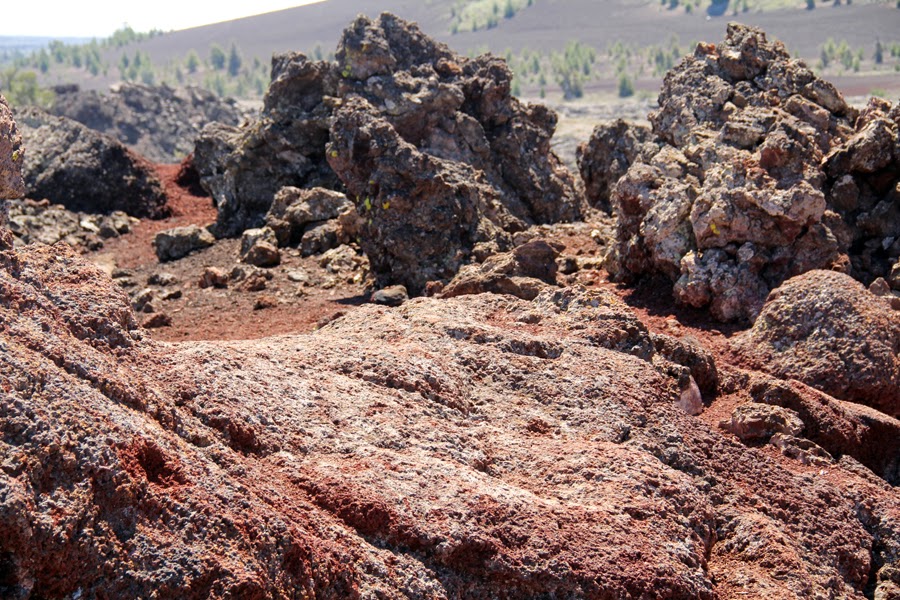 This entire area was once home to volcanic activity, and the monument offers you the chance to study different types of lava flows, as well as caves and lava tubes. 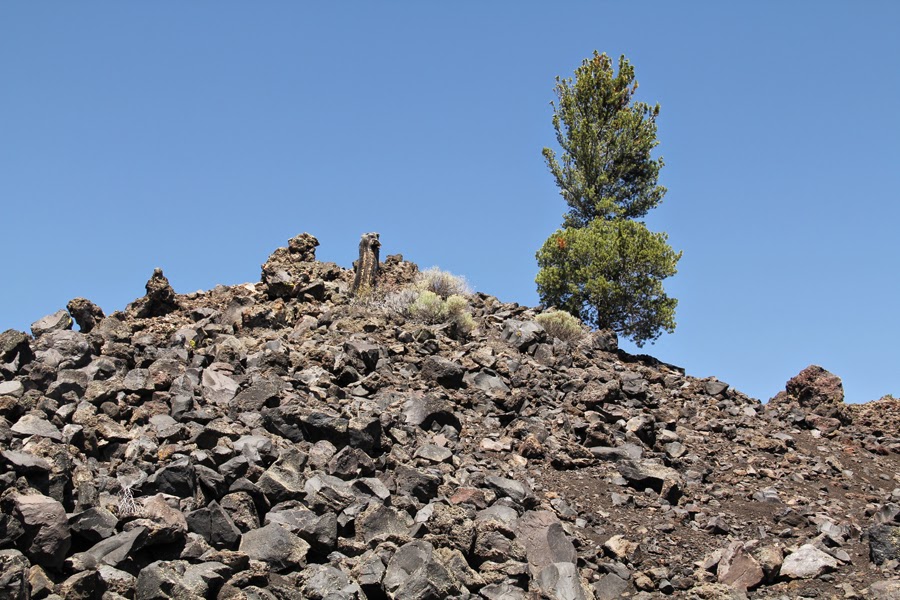 It is amazing how many types of both plant life, 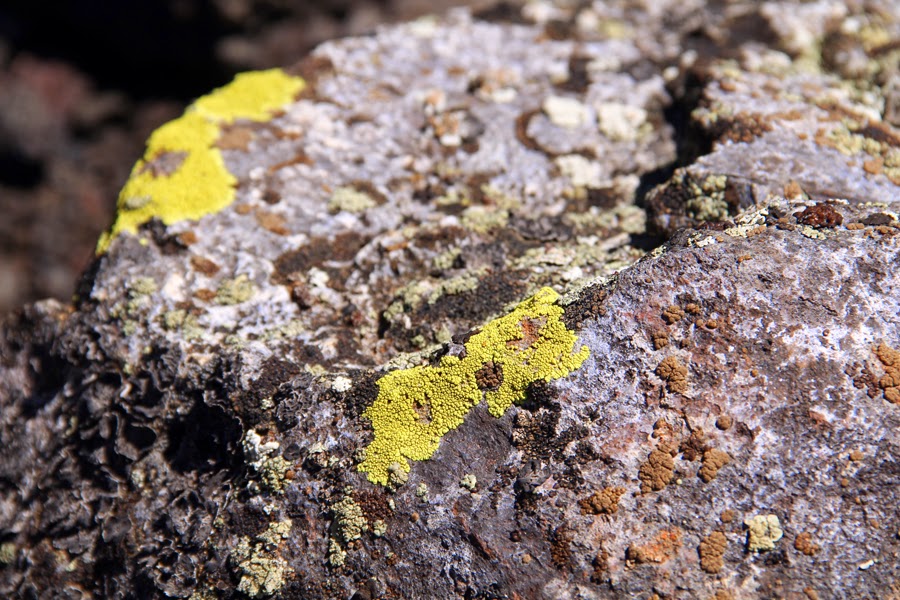 and animal life,
adapt and flourish in this harsh environment.  Once again the views are both interesting and spectacular.  We climbed a cinder cone, 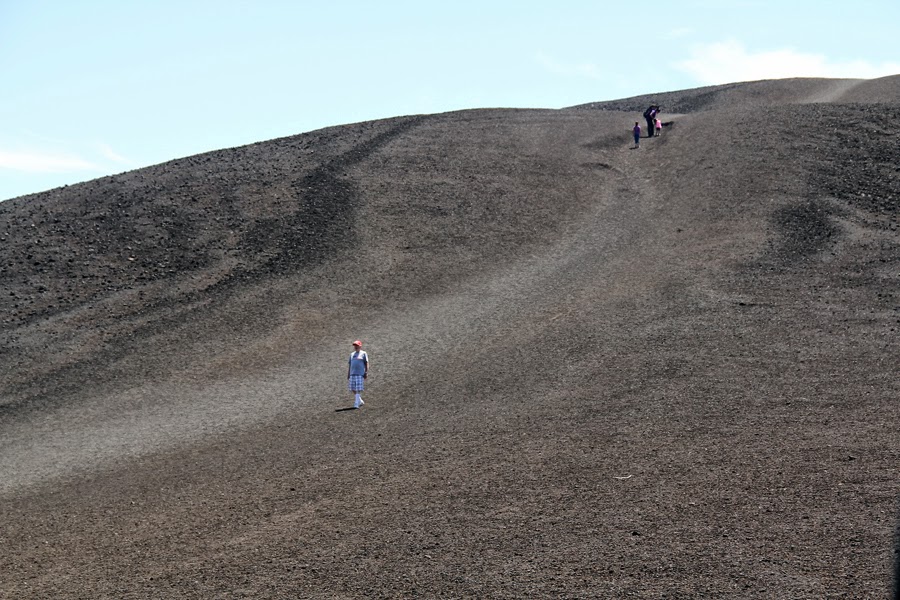 that offered a sweeping view from the top.
Although you can't see it from the picture, this cinder cone was covered with tiny volcanic rocks, many of them containing sparkling iridescent flecks.  So tempting to put in your pocket, especially since Eduardo and I work with rocks, gems and minerals.  But no, no, no!  Thou shalt not take home the rocks, no matter how pretty. We loved our visit to the monument, and found it very educational.  Heading back to camp, we decided that "Pickles" was a must for lunch.  Note the time that breakfast finishes up there.

This is the kind of stuff that entertains me.  Not 11:00, not 12:00, but 11:34.  Funny!  I had a grilled ham and cheese sandwich, and Lizz had a cheeseburger, both with coleslaw, and lunch was awesome.  Don't forget to eat at "Pickles" if you make it to Arco.  We still had plenty of daylight left at camp, so we caught up on some work, and this is how we do it, camping style. Or was that "glamping" style?  They have a great pool there and I took a nice swim to cool off after climbing lava rocks in the blazing sun.  Ahhhhhhh, so refreshing.  After a nice dinner of chicken noodle soup on the camp stove, I headed for the office for some $1.00 per scoop ice cream at their Ice Cream Social, (mine was chocolate almond with chocolate syrup), as a little treat while I did some blogging.  Yum!  Then it was off to bed.  The next morning we were treated to complimentary, home made waffles by our campground owners, along with free coffee.
I spread them with peanut butter and drizzled them with honey for a power breakfast, and they were absolutely delicious.  It's these kind of personal touches that made this KOA Craters of the Moon Campground an unforgettable experience, and I would highly recommend them if you are planning to visit Arco!

We got in the car and embarked on the next leg of our trip, Bozeman, Montana, and it is here that I will leave the story.  Thanks for following us and best wishes to all for a fabulous day!