So What is Amber, Anyway? And That Mine is WAY too dark!

OK, so you might be thinking, what is amber, anyway?  Amber is actually fossilized tree resin, and is highly valued as a gemstone.  In Mexico, it is mined in and around the town of Simojovel, Chiapas, and can be found in a variety of colors including yellow, 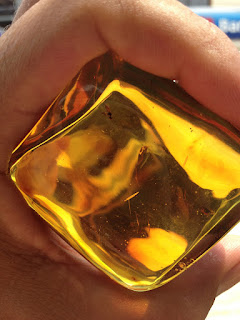 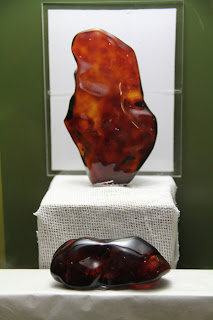 brown, orange and green, with the most expensive being red and the very rare green.

Even more highly prized than color is the amber that has "inclusions" of either insects or plant matter. 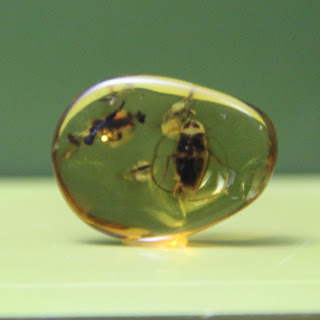 In Simojovel, it seems just about everyone sells and wears amber.  Indigenous women in bright beautiful clothes approach you with small bags, whispering "Want to buy some amber"?  They are particularly proud to let you know when they have amber "con insectos" (with insects). 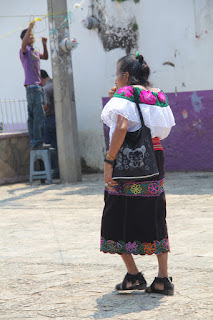 The saints in the church wear amber, 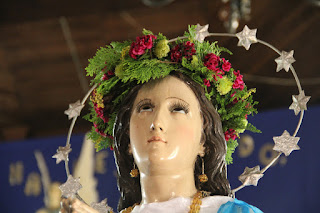 and the babies wear amber. 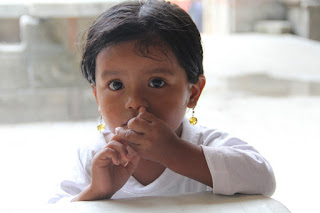 There are stores near the town square where local craftspeople can be found creating jewelry, 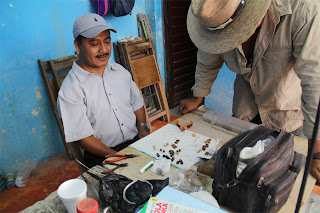 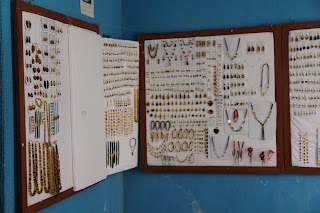 and there are vendors lining the town square, 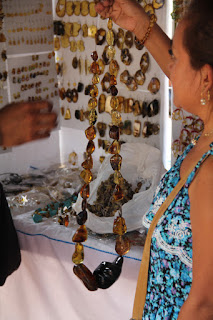 There is an Amber Museum, 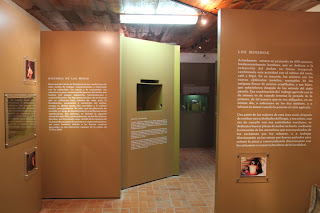 with a video explaining the mining process, great reference books, beautiful specimens both finished and in the rough, including this carved piece in the shape of a mermaid, 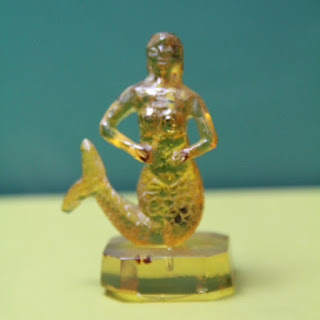 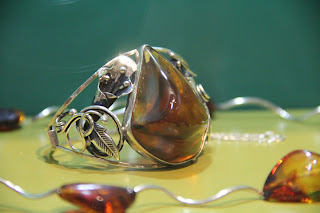 and a fabulous director named Jorge Balcazar, who we met on day one, and became a great friend to us for the rest of our stay. 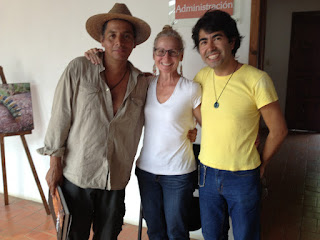 Also on day one, we met some people at breakfast who helped us arrange a tour of a mine, with plans to meet at our hotel at 9 am on day two.  Our guide Winclen arrived on time, and we took a fifteen minute taxi ride up the hill to one of the mining parts of town, 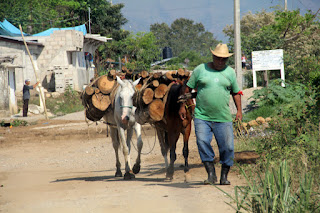 where we paid a nominal fee to the miners, asked the taxi driver to come back for us in an hour and a half, and then started the twenty minute walk to the entrance to the mine. 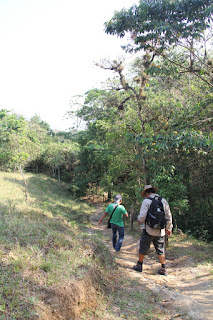 It was hot and humid, and we walked up and down several hills, then crossed over a stream on a small bridge where I saw these mushrooms. 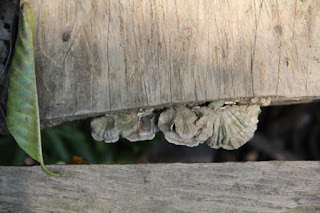 As we got close to the entrance, there was a spectacular view of the valley, 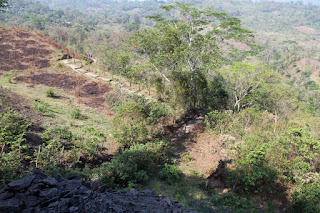 and this large pile of rocks. 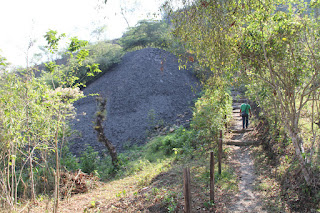 Nearly at the entrance now, we were joined by a miner who announced that we needed to pay him another small fee in order to enter the mine.  Did I mention he was carrying a machete?  This is a common tool here, but I found it a little unnerving.  We paid him the fee and advanced to the entrance, trying to avoid sloshing through the puddle that was at the opening. 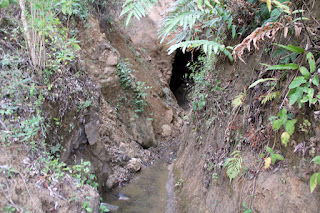 Once we passed the puddle, we realized that none of us was carrying a lamp, and it was then that I lost my nerve. 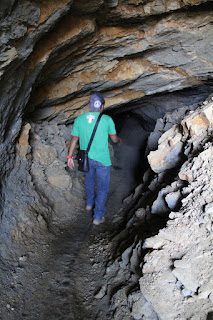 The passageway was extremely narrow, pitch black, and hot, hot, hot!  I told Eduardo that I would wait at the entrance, and he and Winclen should go ahead and advance.  I realized this was a bad idea when the miner returned and sweetly asked me if I could give him more money.  I called for Eduardo and Winclen, and Eduardo decided it was best to abandon the project! 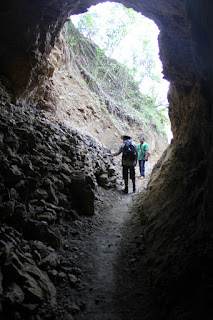 I actually gained a lot of respect that day for the miners and the difficult conditions they must endure to get the amber.  Their job is so much harder than the sellers in town.  I was told that this passageway that we visited was actually considered large compared to some others, where the miners have to crawl in because the hole is too small to stand.  Yikes!

For the rest of our stay, we met with various people in the town, trading for amber, and exposing the locals to other types of stones, such as Ethiopian Opals.  Eduardo seemed to attract a crowd wherever he went.  Here he is with a mother and her two daughters who work in amber, 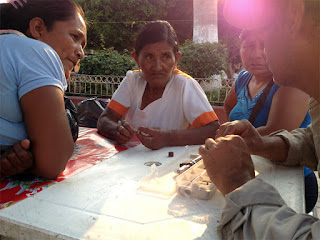 here he attracted attention in the town square, 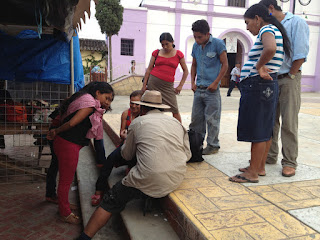 and here he got more attention at the Amber Museum, including from the local policewoman who also became both a friend and an opal lover. 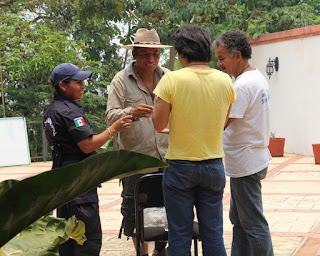 On our final morning in town, we discovered a gem of a chef at the food market near our hotel.  Working alone in this tiny space, 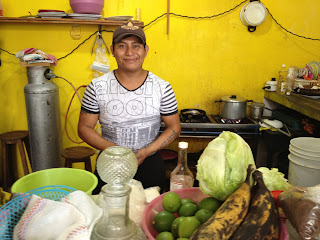 he served us this delicious and beautifully presented breakfast, made with pride and an obvious love for his work. 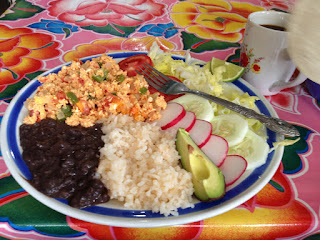 We decided this is the kind of guy that gets discovered in a tiny town, and ends up as a chef in New York.

On Friday we bid farewell to our new friends and got back on the road, dropping our policewoman friend off in the next town on the way.  We were assured by several townspeople that the road that we would be taking out of town was much newer and nicer than the one we took from San Cristobal, so we had high hopes for an easy ride to our next destination of Villahermosa in Tabasco.

Was the road newer and nicer?  You'll have to wait for that answer, because it's almost 2 am here now and I'm too tired to tell you any more tonight.  Will I ever try entering an amber mine again?  Maybe, if you can find me one with a bigger hole and give me one of those hardhats with a great big light!

I wish you all the sweetest of dreams, and Buenas Noches.