On Monday we left Denver in the late afternoon, and headed north up I-25, spending the night in Wellington, Colorado.  We awoke on Tuesday to beautiful weather and a pleasant drive through eastern Wyoming, and decided to drive as far as Deadwood, South Dakota.  It was when we neared the South Dakota border that the landscape changed from pleasant to spectacular.  Wide open fields gave way to pine trees and rock formations, and literally minutes after we crossed the border we started to see animals.  First we were greeted by this curious cow standing right by the side of the road, 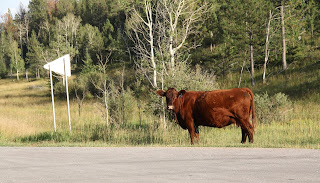 followed by wildlife spottings,  including deer, 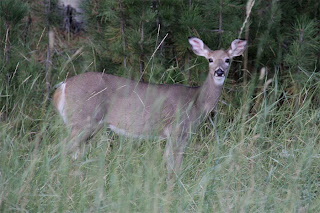 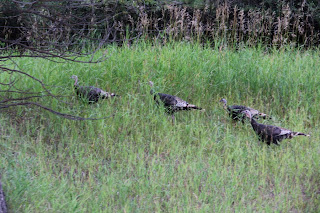 The subsequent drive through "Ice Box Canyon" offered breathtaking views of both landscape and wildlife.  We had at least five more deer spottings, some in groups of two or three at a time, the most we have ever seen along one short stretch of road. 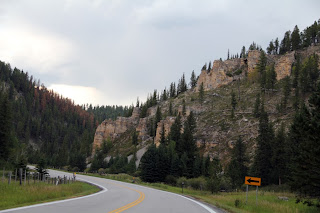 We were told that the Black Hills are very popular for winter sports, especially skiing and snowmobiling. 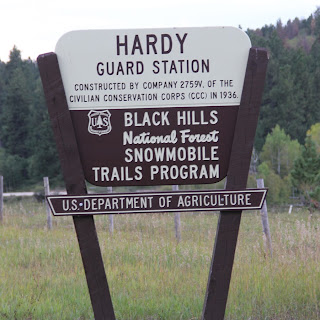 It is called the "banana belt", because while they get snow, they enjoy mostly bright, sunny days, making the weather particularly pleasant even in the winter.

We spent the night just outside of Deadwood, which is an old western gambling town, boasting many inns, restaurants and casinos in original historic town buildings.

On our way out of town this morning, we took a drive through beautiful Spearfish Canyon, enjoying one last look at the Black Hills.  We noticed a sign stating that scenes from the movie "Dances With Wolves" were filmed in this area. 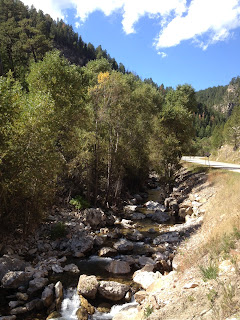 As we came of out Spearfish Canyon, we hopped onto I-90 East and started our drive across the state of South Dakota.  The landscape changed again, and became gentle rolling hills and wide open fields.

We began to see billboards for a place called Wall Drug.  A lot of billboards.  For miles.  So of course, we decided to check it out, even though we didn't expect much.  We were thoroughly delighted with our stop in Wall, which is just outside of the Badlands.  Wall Drug was established in 1931, basically in the middle of nowhere.  By putting signs out on the road (that was then the old Route 16A), the owners were able to draw hungry and thirsty travelers into their store.  They became successful, and continue to use that same advertising technique to this day.  They still sell coffee in the cafe for 5 cents a cup, too.  We had some!  And one of the best fresh chocolate glazed donuts I've ever tasted. 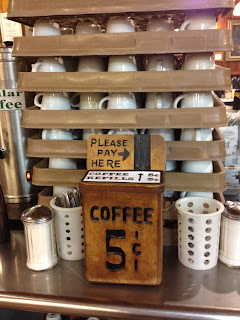 Wall Drug has an amazing bookstore with an extensive selection of books about the history of the American West, and they also boast over 300 original oil paintings lining the walls of several of the dining rooms, featuring works by the likes of N.C. Wyeth and Dean Cornwell. 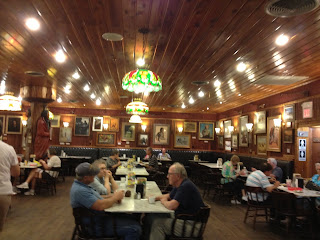 After our visit to Wall, we were back on the road heading east toward our goal for the night of the Sioux Falls area.  Even though the landscape was back to rolling hills and open fields, the big open sky was really beautiful as the sun started to set and the giant clouds took on the hues of the sunset sky. 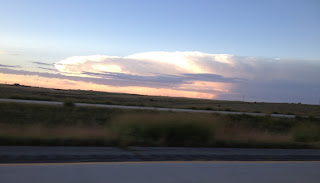 We were delighted with the beautiful surprises we found in South Dakota, and would definitely like to come back and visit.  Because our time was limited, there is a lot we didn't see, including Mount Rushmore!

Since we crossed into the Central Time Zone tonight, so it's now 1 am!  Time to say good night and sweet dreams to all.