Visiting the Pyramids of Teotihuacan

But first just a few words about Monday.  It was a day for family, and we had dinner at the house of a cousin who lives here in Mexico City.  I just wanted to share the hors d'oervres, which I thought were adorable, 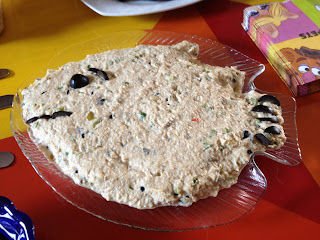 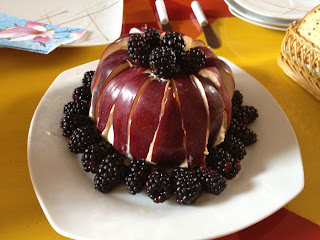 and the beautiful Mexican candy.  It was a most enjoyable day with some very special people. 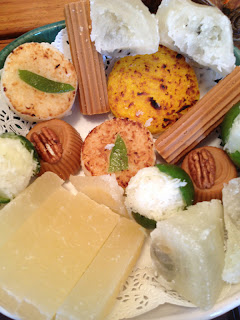 Tuesday, Eduardo and I took a trip to the pyramids of Teotihuacan, which is an enormous archeological site located about 30 miles northeast of Mexico City.  It entailed about a 30 minute metrobus ride, followed by a 1 hour bus ride to get there.  On the bus, I was delighted when a guitar player stood up and started singing a string of songs, including the Spanish version of "My Way" by Frank Sinatra. 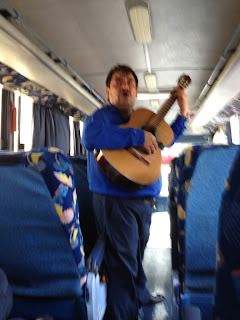 Being the emotional girl that I am, this is the kind of stuff that brings tears to my eyes.  I couldn't help but feel the irony in the moment, as I looked out the window at the impoverished outskirts of the city, while hearing the beauty of the music.  The bitter and the sweet.  A poignant moment for me, but the guy snoring loudly in the seat behind me was not nearly as affected. 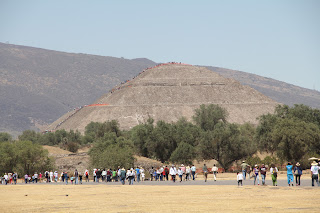 Along the walkway, there are many ancient ceremonial platforms, which were believed to once have temples at the top. 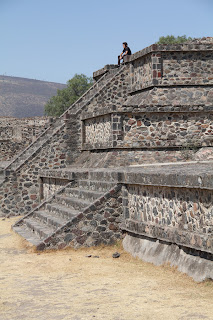 Approaching the base of the Pyramid of the Sun, I saw just what a big climb we had in store for us. 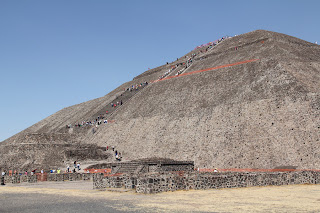 The steps were steep and narrow. 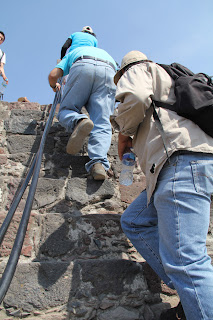 But the view from the top was the reward, along with the feeling of spiritual power coming from such ancient ground.  The city of Teotihuacan is believed to have been established between 100 BC and 250 AD, and the name is translated to mean "where man met the gods".  It indeed seemed like a very good place to pause for a moment and say thanks for our many blessings, including the ability to be there and make it to the top!  Here's the view of the Pyramid of the Moon from the top of the Pyramid of the Sun, 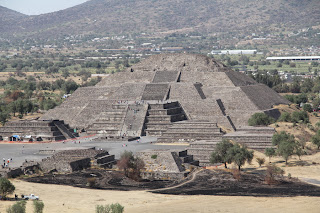 and a view of some of the ceremonial platforms. 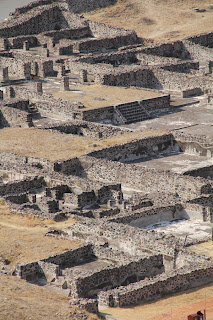 Back down at the base of the pyramid, there were many vendors selling arts and crafts.  This Aztec Calendar was exceptionally nice.  That's the Pyramid of the Sun in the background. 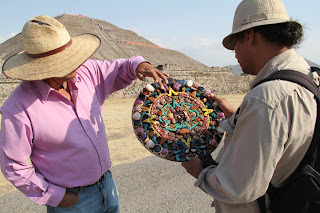 This vendor had a great selection of masks, many carved out of obsidian with various stones and shells as inlay.  This particular area of Mexico is rich in obsidian. 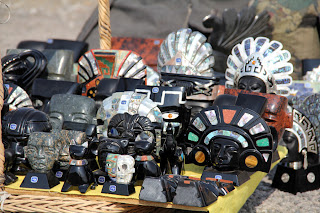 On the site there is also an excavation of the Palace of Quetzalpapalotl.  This a photo of one of the interior details inside the palace. 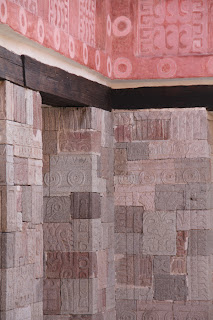 There is an entrance fee of only 57 pesos per person (less than $5.00) to view Teotihaucan, and it was really a powerful experience that I would highly recommend.  Being there really makes you think about what civilization was like at that time, and how they were able to build such amazing structures.  A bit of a mystery!

My best to you all and Buenas Noches.