Only about two hours from Mexico City, the town of Tlaxcala is the capital of the state bearing the same name, which is the tiniest state in Mexico.  The town has about 70,000 inhabitants and is one of the cleanest and most well maintained of all the cities I've visited so far in Mexico.  It is a prehispanic city and culture, where the Tlaxcalans allied themselves with the Spanish to defeat the Aztecs.  The territory of Tlaxcala was formally established in 1585.   The Federal building on the Zocalo (town square) is filled with large colorful murals depicting the history of the town. 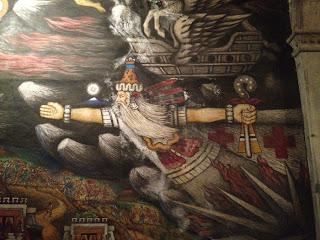 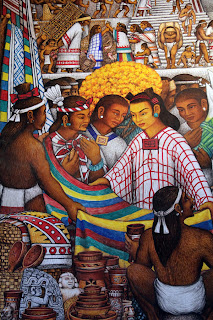 In search of something to eat, we turned as usual to the local mercado.  I was taken by surprise by the marketing of the heads of several animals, a sight I haven't seen in the markets so far.  A cow lover, I found this a little alarming, yet compelling. 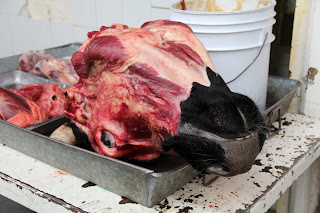 Part of visiting another culture is understanding and accepting that some things you see will be different than what you're used to! 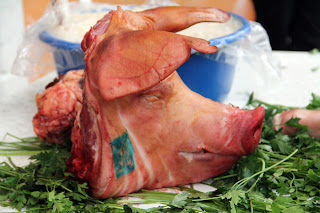 All of the chickens I saw were sold with the feet still attached. 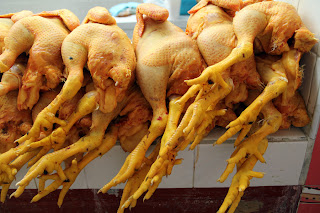 And I saw a bucket of squash flowers like the ones that were served in Eduardo's quesadilla yesterday. 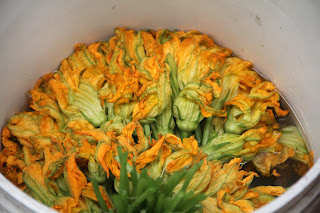 I noticed that in this area, and in Puebla as well, you frequently see musicians with xylophones in both the market and on the streets. 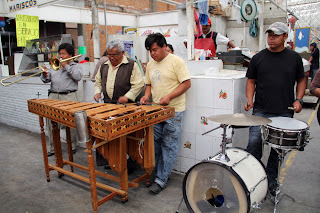 Like the rest of the town, the market was spotlessly clean.  We stopped to eat mixiotes de pollo, which is a pit-barbecued meat dish that is a local favorite found here in central Mexico.  The chicken, still attached to the bone, is seasoned and then wrapped in the leaves of the mageuy, or century plant, and cooked in a large pot. 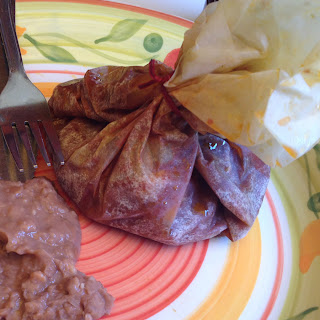 The result is a very delicious, moist and tender chicken, and a happy, smiling me. 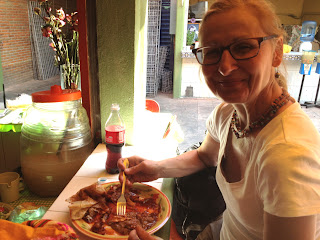 Thanks to Eduardo's ability to chat with the locals, at the restaurant we were told about a museum in town displaying the art of the region, so we made that our next stop.

Tlaxcala has a type of mask that is unique to this area, carved from wood, set with glass eyes and false eyelashes, and then painted and lacquered to a glossy finish.  The museum had a case displaying the process. 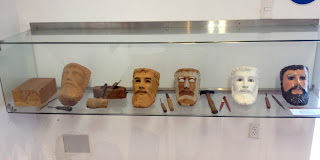 Here is another example of the finished product. 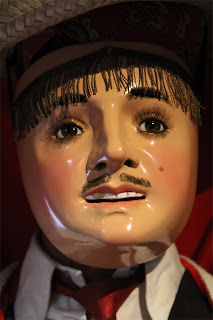 The region is also known for textiles and weaving, and we were given a demonstration on the weaving process. 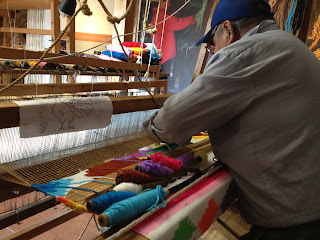 There were also brightly beaded local costumes on display. 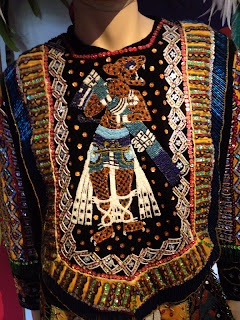 Another interesting thing about the town is that there is a bullfighting ring here.  The state of Tlaxcala has the largest number of bull breeding ranches in Mexico and is a center for bullfighting.  Toro! 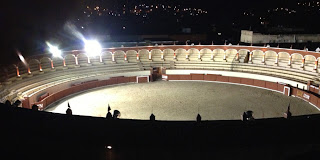 Visiting the town of Tlaxcala was a real unexpected pleasure. We will be moving on today to finish our tour of the state of Tlaxcala, to discover more interesting spots to share.  I wish you all a beautiful day!