The Fabulous Port of Veracruz and my Moment with William Levy

Last night we spent the night in the port city of Veracruz, and I was delighted to get my first glimpse of the Gulf of Mexico.  I LOVED visiting this city!  It is Mexico's oldest, largest, and most historically important port.   Hernan Cortez landed there in 1519, making it the first Spanish settlement in the Americas.  Today Veracruz is the largest city in the state of Veracruz, with over 500,000 inhabitants. 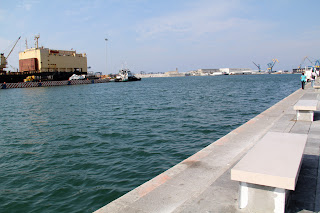 After finding a hotel in the thriving historic district, we took a stroll along the port, and decided to rest on a bench at the pier.  Eduardo noticed there was a film crew so he suggested we take a walk to the end of the pier and see what was going on.  They were just wrapping up for the day, and the actor involved was none other than handsome cuban star William Levy, of Dancing with the Stars fame.  A true gentleman, he was kind enough to pose for a picture with me, and then come back and take another one when the first one didn't register on the camera.  Very nice guy!  My only regret is my wispy, windy hair moment! 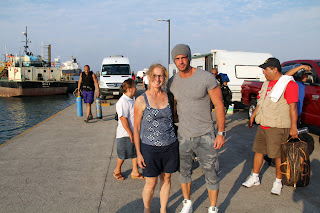 This was our second brush with a celebrity in Mexico.  The first, you may remember, was in Taxco when novela star Eduardo Capetillo flashed me a winning smile during a break from filming.

Next we took a bus to the other end of the oceanfront walk, about two miles down the road, and then decided to walk back along the water to the historic district.  We were impressed with how many people were out around sunset, walking, jogging, bike riding and roller blading. 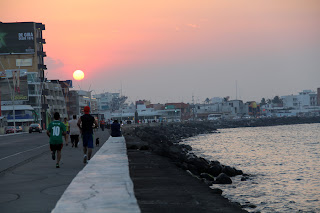 There were also several workout stations along the path. 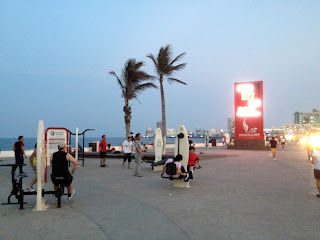 During the day in Veracruz it is hot, hot, HOT, so it's no wonder that people come out in the evening when the air turns deliciously cooler.

When we got back to the historic district, we stopped for a well-earned beer and some tostadas de pollo at one of the outdoor restaurants on the zocalo.  While we were eating, we were approached by many vendors selling flowers, blouses, bags, hammocks, sunglasses, chicklets, pan, arroz con leche, cigars, pens, and watches, to name a few.  You can shop without leaving your chair!  There were musicians (notice the harp, which was a beautiful addition and is common to this area), 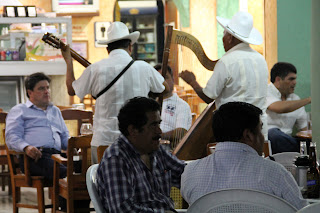 and there was a clown walking a tightrope between vendors selling clothing. 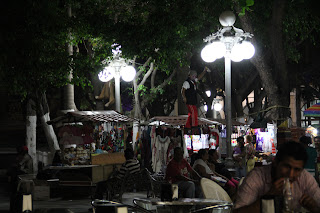 Here's a lady with a portable cigar stand. 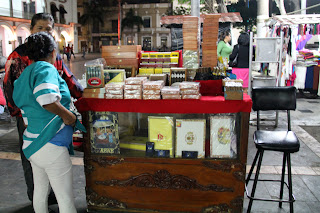 It was after 10 PM, and the zocalo was still alive with activity.  It was really fun!

The next morning we took another walk through the zocalo, 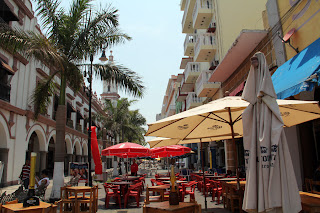 and had cafe con leche at one the oldest coffee spots in Veracruz, called Gran Cafe del Portal.  The coffee was fabulous. 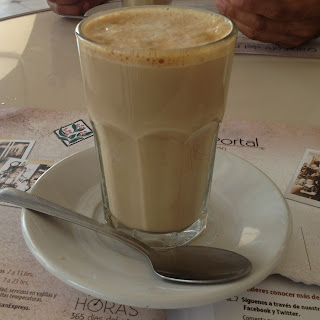 We stopped at Sanborn's, a favorite department store in Mexico, and I was delighted to find more books in English there than at the Sanborn's in downtown Mexico City.  I was able to get a book! Heading back towards the hotel, this old tile wall caught my eye, 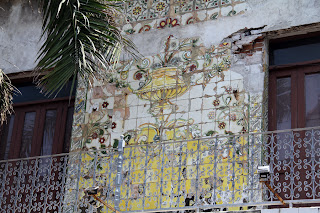 as well as this building detail. 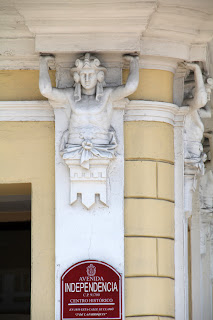 On the drive out of town I spotted this colorful mural, 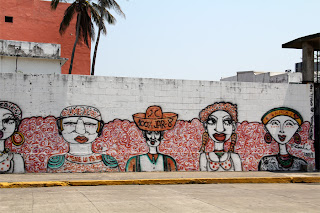 and this great sculpture depicting the same type of performers you see live here in Mexico in places like Puerto Vallarta. 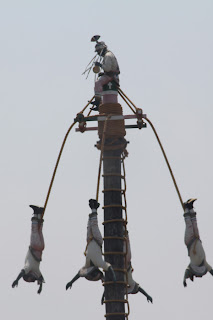 I was really enchanted with the port of Veracruz, and it brought back many of the feelings I had while visiting Mazatlan.  It reminded me that being close to the water gives me a happy heart!

I hope you all enjoyed your day as well, and I wish you all sweet dreams, and Buenas Noches.