It's Wednesday evening, and I'm writing from Guerrero Negro, on the Pacific Coast, about halfway down Baja California.  I have a lot to tell since I've last written, because I've been without internet since Sunday morning, so I'll catch you up tonight on the trip that started on Sunday to Bahia de Los Angeles.  We awoke to church bells on Sunday morning at 6:45 AM, and ventured out for breakfast around 9:30, eating one more time at our little restaurant near the hotel in San Quintin.  Here's a picture of Eduardo's machaca, served with some fresh Mexican cheese. 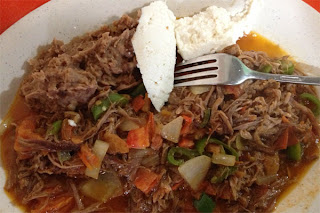 We bid farewell to our hosts at the Hotel Uruapan, and headed out around 10:45 am.  The drive to Bahia de Los Angeles is 349 kilometers (217 miles), and we stopped in El Rosario, about 37 miles out of town, to gas up for the drive.  The next gas opportunity before the Bahia, by the way, is a guy standing by the side of the road in Catavina (about halfway there) with a big container of gas!  Just after exiting El Rosario there is a military check-point, and then the real drive begins.  The road to Bahia de Los Angeles is a two lane, well paved road that took us on a spectacular drive through the desert, heading from west to east across Baja.  With Andrea Bocelli blasting from the speakers of the car, I was overwhelmed with pure joy at the beauty of the desert landscape.  Towering cacti rose majestically from open plains, then from between large boulders, then from open plains again, with mountains in the distance in every direction. 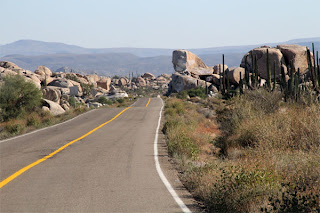 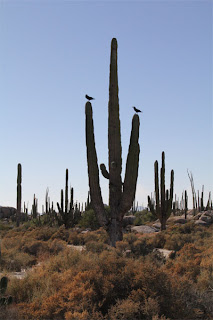 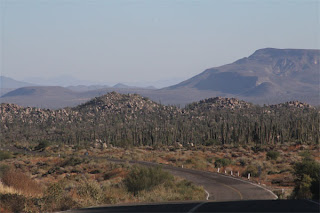 After driving down Highway 1, we took the exit towards Bahia de Los Angeles, continuing about 45 miles east towards the Sea of Cortez.  When the sea finally comes into view after about 5 hours in the desert, the blue of the water is breathtaking! 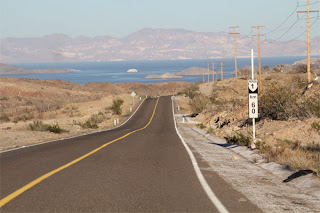 As you can see, I am pretty happy here!  We made it! 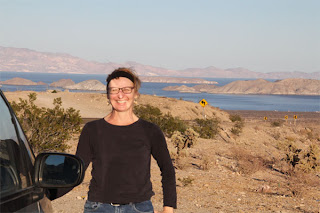 At this look-out point, by the way, many of the rocks on the ground were different types of quartz, some white, some rose, and I picked up a beautiful lavender piece.  We were told by the locals that many gems can be found in the surrounding mountains, and gold mining was done there in the past as well.  Since we arrived in town around 4:15 pm, we were pretty hungry, and quickly discovered tacos de pescado were the town specialty, as the fish are freshly caught and delicious. 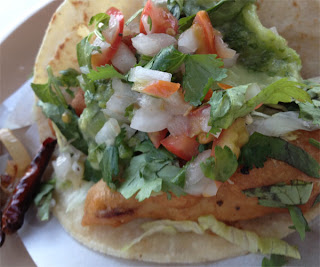 We found a hotel for $35.00 a night, super clean and a very nice room but no internet.  Although we could get on the internet at several cafes, the service was difficult at best, and there was no cell phone service.  We rested at the hotel for a while, then took an hour and half walk around midnight down to the beach and back from our hotel, lit by an almost full moon.  The bay was calm and peaceful.  Downright magical!

Monday morning we headed into town for breakfast, then happened upon the mining museum.  Although it was closed, we enjoyed the front yard and it's relics from the gold mining period in the area.  Here's Eduardo with a huge copper pot that was used in the mining process. 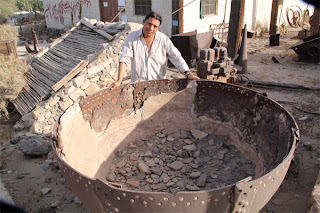 You know I always enjoy the signs that we find when traveling.  Here's a cute one outside one of the hotels near the beach. 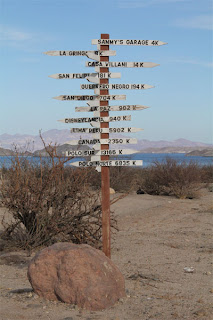 And an abandoned building I liked: 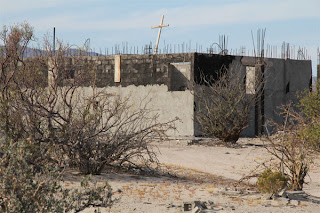 Late in the afternoon we decided to visit the dock where the fishing boats launch, and it turned out to be one very busy "runway"!  This is a tiny town, and we saw a LOT of fisherman.  Fishing is definitely their main commerce here.  While sitting on the dock, I saw a ray in the water!  Like being at Sea World, except in real life. 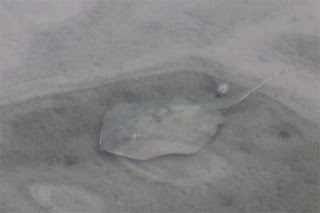 We thoroughly enjoyed watching the coming and going of the various boats that evening, and of course Eduardo always loves chatting with and learning from the locals.  Here's a picture of one of the many boats docking that evening: 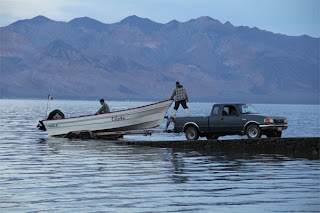 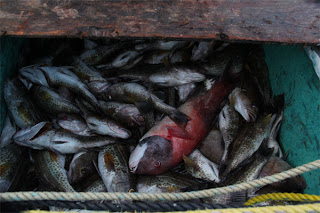 and finally, the moonrise over the bay, where we enjoyed a bottle of Mexican wine from our soccer chairs on the dock.  The end to a most beautiful Monday. 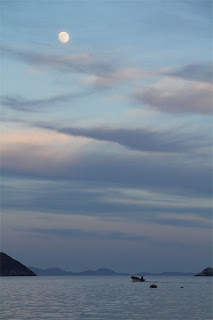 In my next post, I'll catch you up on our Tuesday departure from Bahia de Los Angeles, and the trip to Guerrero Negro.  Thanks for following, and Buenas noches!
Linda