We're got wi-fi tonight, and it's time catch you up on our trip from Bahia de Los Angeles to Guerrero Negro.  Tuesday morning we decided to have breakfast at our hotel, Los Corales, before hitting the road.  The owners prepared us a delicious fish dish, served with refried beans and fresh salad, which I don't know the name of, so I will call it "fish scramble"! 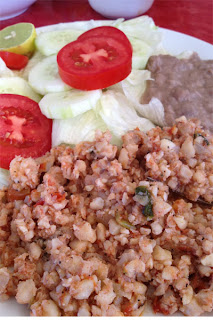 After breakfast and coffee served in Christmas mugs, we were back on the road.  My friend Julie gave me some great information, after reading my last blog post. about the tall candle-like trees that look like cacti in this area.  They are called Cirio trees, and are native to this particular area of Baja.  Thanks, Julie!  They grow quite tall, and many of them were blooming with big flowers at the top.  They make for a very beautiful, dramatic and memorable landscape. 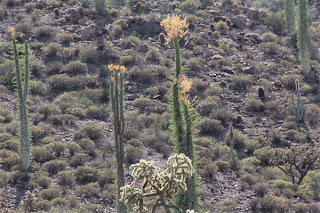 We continued south, heading for Guerrero Negro, which is located on the 28th parallel, and is the transition point from Baja Norte to Baja Sur. 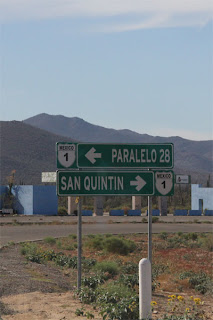 The distance from Bahia de Los Angeles to Guerrero Negro is 201 kilometers (125 miles), and again is a well-paved two lane road that traverses the desert, this time from east to west, taking you back to the Pacific Ocean.  After arriving in town, we headed for Laguna Ojo de Liebre, which is located in the El Vizcaino Biosphere Reserve (the largest wildlife refuge in Latin America).  This area is most attractive to tourists from January to March, when the gray whales return to mate and have their babies! 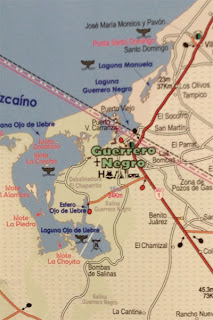 Although we were too early to see the whales, we were still taken with the beauty of this protected area.  The salt flats attact many different types of birds, and I really enjoyed seeing the white egrets.  In this shot you can see an egret, as well as the sand dunes in the distance. 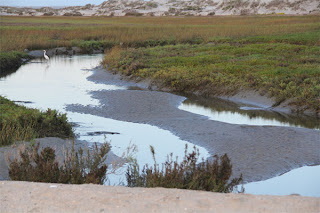 The sun was beginning to set as we drove through this area, and since we were surrounded by marshes on both sides of the road, and had an almost full moon, the views were dramatic. 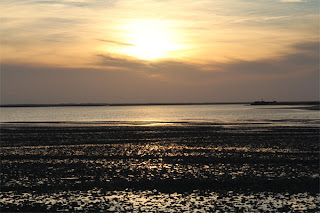 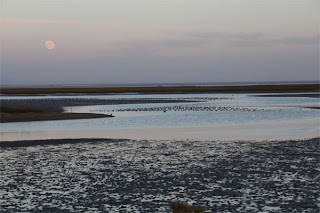 At the end of the road was an abandoned light house and a large open area that is a popular spot for local fisherman.  We camped there for the night.  Those of you who know me are probably chuckling right now because you know that I am not a camping fan.  But this trip is about growing, right?  Ok, ok, I'm growing!! 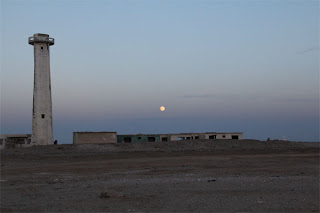 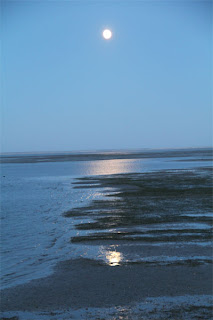 The next morning, (Wednesday) Eduardo got some help from one of the locals with his fishing pole. 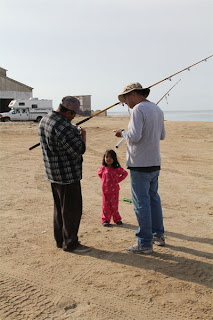 Then another local came by and offered us a bag of clams, along with a tomato and an onion.  Now, mind you, I do not usually eat raw clams for breakfast, and I was more than a little skeptical.  But Eduardo got to work preparing the clams for us: 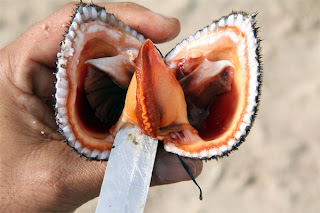 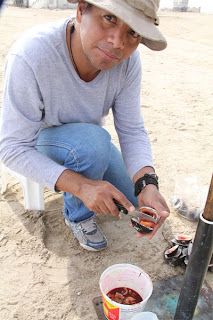 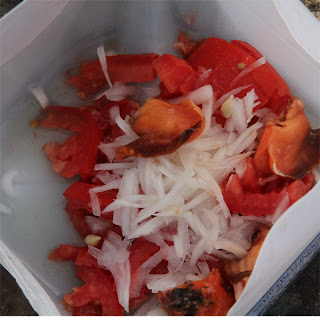 Time for me to do a little growing again!  I was trooper and tried them, and they were really quite delicious, fresh from the sea.  Later, fixing that fishing pole paid off as well, when Eduardo caught a fish! 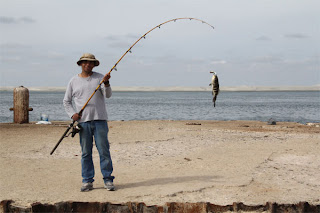 Before heading out of the reserve area, we thought about climbing to the top of the old lighthouse, but I had second thoughts after seeing the steps.  Eduardo started the climb, but too many missing stairs made for an aborted mission. 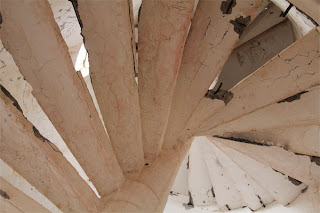 On the way out of the reserve, we spotted an area with piles and piles of shells, 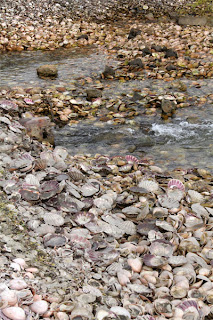 and the growing clouds made for dramatic reflections on the water. 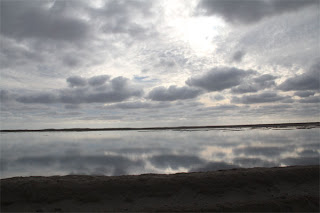 We found a local hotel for our second night in Guerrero Negro, clean with internet for $35.00, and ate some tacos de pescado in town. On our way back to the hotel, it was beginning to look a lot like Christmas! 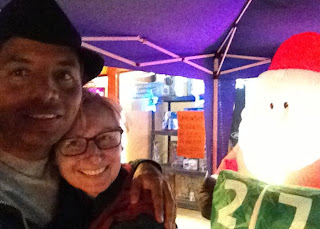 Stay tuned for my next post, as we continue our journey down the beautiful state of Baja California.
Thanks for following, and Buenas Noches,
Linda