Thursday morning we checked out of our hotel in Guerrero Negro, and stopped at the local market to pick up some food for the road.  We bought milk, cheese, chips, and some homemade goodies like coconut candy and two types of homemade empanadas, one with meat and one with sweet beans. 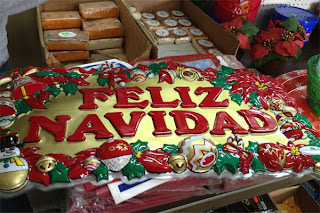 We drove south heading towards San Ignacio which is a 145 kilometer (90 mile) drive, and once again found ourselves traveling through the desert on a two lane well paved road.  Shortly before San Ignacio, Eduardo suggested we take a side trip to Punta Obreojos, a small town located on the Pacific, so we took the turn-off in that direction.  The road to Punta Obreojos seemed to be a road to nowhere for quite sometime!  I could tell that we were heading west, but saw few signs telling us where we were headed.   The landscape became very flat. 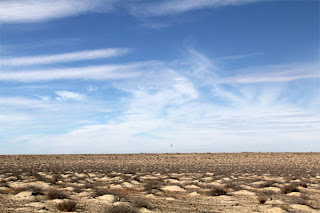 After we had been driving west for about an hour, and I was becoming convinced the town did not exist, it appeared! 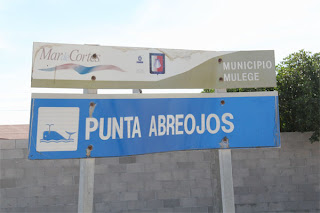 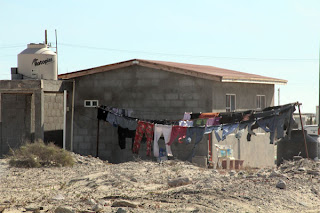 At this point I need to add this photo of the first house that greeted us in the town for two reasons.  One is that I seem to have a thing about taking pictures of laundry hanging out on the line.  Maybe this is because my mother used to hang out our laundry when I was a kid, and it brings back fond memories.  The other reason is that I wonder about seeing laundry hanging out in dusty places, because I would think it gets dirty again before it ever makes it back in the house.

Anyway, Puenta Abreojos is a quiet, tranquil spot, known for lobsters and good surfing, and appears to be a fairly new and growing community, with nice well kept houses and quite a few gringitos (Americans).  It also was one of the first places in Baja since leaving Ensenada that I began to notice some shops selling art.  This made me happy! 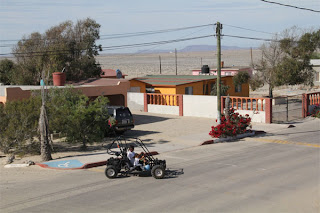 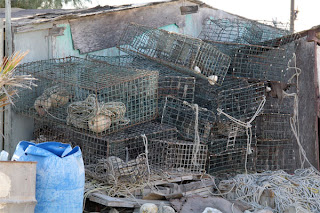 Above are some lobster traps I spotted in someone's yard.  Below, we stopped by the lobster cooperative, where they package and send out the lobsters, and Eduardo was able to get us a tour of the tubs where they hold the lobsters.  This little guy posed for me. 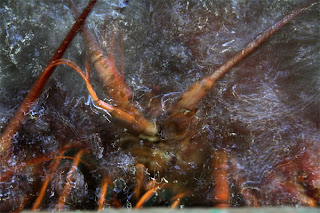 We would like to have spent more time in this charming little town, but decided to keep moving, and took the one hour drive to San Ignacio.  Upon arriving in San Ignacio, we were delighted to be greeted by another charming town!  The landscape at this point is beginning to look decidedly more tropical, with palm trees and bougainvillea, and there is a beautiful historic church.  This is the first historic church we've visited since entering Baja.  Again this made me so happy, because I was beginning to crave the art and antiques of Mexico. 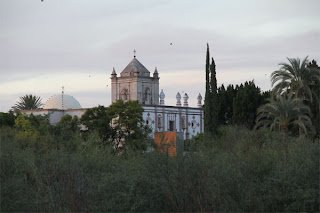 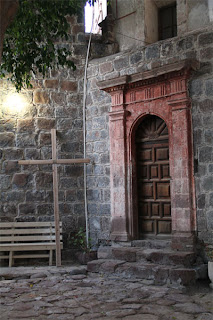 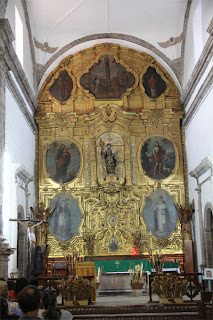 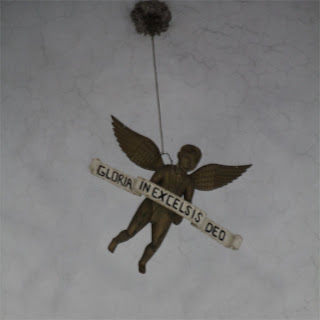 I was really enchanted by the tiny town of San Ignacio.  We took a walk in the early evening and enjoyed the colors as the sun began to set. 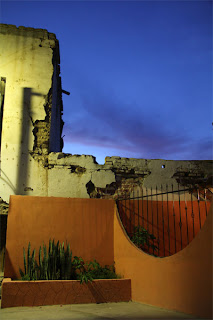 Later we had coffee at a food stand on the square in front of the church.  They had a television outdoors and we watched a silly Christmas movie with Tim Allen and Jamie Lee Curtis, in English with Spanish sub-titles, and enjoyed the warm night air.  So pleasant!  We walked back to our hotel just on the edge of the main town, and tucked ourselves in for the night.
Buenas Noches,
Linda