We arrived in Barre de Navidad late on Wednesday afternoon.  It is a small fishing town of about 7,000 people, and that's about all I knew about the place, except that I thought it would be fun to visit a town with Navidad in the title so close to Christmas.  We found a nice clean hotel a few blocks from the beach, got some dinner, and then took a walk to try to find out more about the town.  We found a very lively downtown area with restaurants, shops, and craft vendors.  I liked this sign outside Lucy's Paradise restaurant, 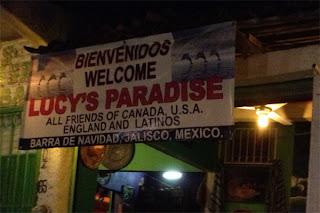 and the dolphin mural inside on her wall. 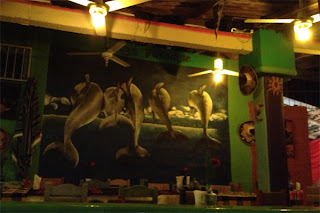 We saw the local fish market, where they were preparing freshly caught Dorado to sell to the restaurants. 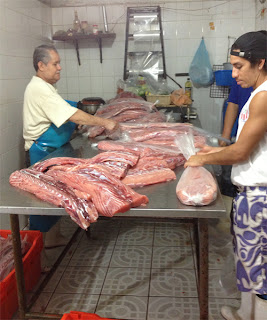 And a table with fresh oysters. 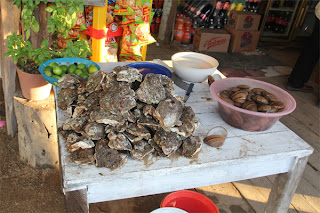 On our way back to the hotel we stopped at a food vendor right across the street for a late night snack before bedtime.  You may have noticed by now that Mexicans like to eat!  A LOT!  I had the most delicious shrimp tostadas of the entire trip so far.  Prepared with sizzling hot shrimp, melted cheese, and green peppers, they were like mini Mexican pizza's. 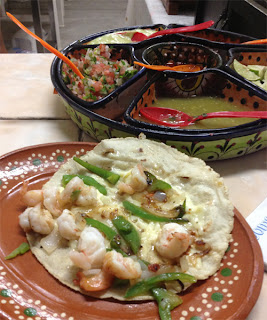 The next day we went walking, and discovered that Barre de Navidad had been hit by Hurricane Jova on October 12, 2011, and the town sustained significant damage.  This piece of tree trunk was outside one of the hotels, where the tree had been severed by the storm. 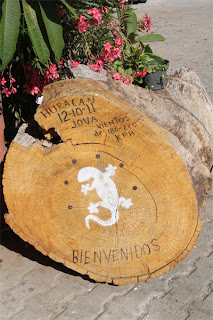 Barre de Navidad has a lagoon on one side and the ocean on the other, separated by a walkway about as wide as a road.  The storm caused quite a bit of damage to a small stretch of businesses along the ocean side, and the width of the beach decreased as well.  You can see the way the water is right up against some of the buildings in this picture. 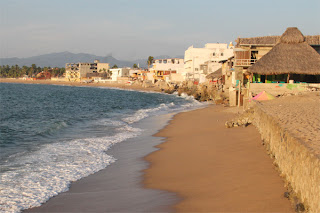 Their tourism was hurt by the storm, and they are still recovering, but the town is postively magnetic, and ranks among my favorites on the trip.  Here I am enjoying a little down time by the lagoon, outside a great hotel called the Sands. 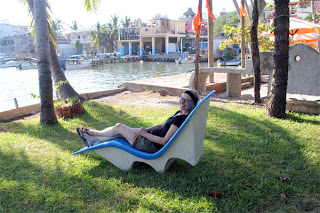 Here's the pool at the Sands, which faces the lagoon. 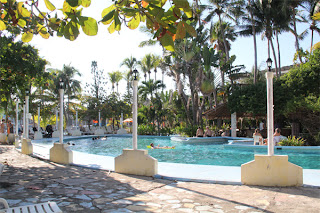 An antique style hotel, we could tell it was a favorite among visitors from the states.  Although we didn't stay there because we discovered it too late, I thought it was worthy of mention in case you ever visit Barre de Navidad! 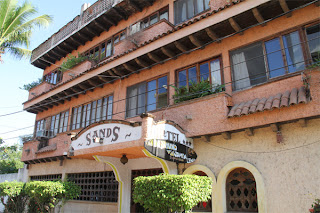 Dinner time was approaching, and of course we needed to take advantage of all the fresh, inexpensive seafood here.  Here's Eduardo's seafood cup, 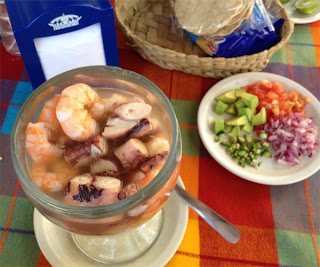 and some rice pudding that a local woman came by selling in a cart. 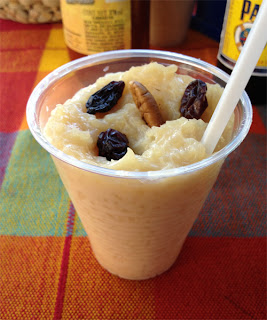 I always like to photo the mermaid art that I see, 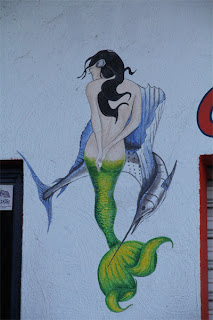 and there was a beautiful six foot tall Aztec Calendar painted on the wall of our hotel. 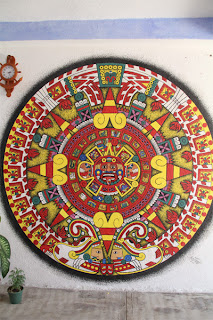 There was yet another lovely Mexican sunset. 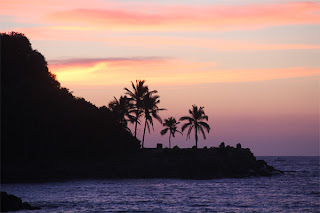 The next morning the owner of the hotel where we stayed took us on tour of her hotel, which they had completely renovated, and had many rooms with kitchens.  She also took us up on the roof to show us the view, 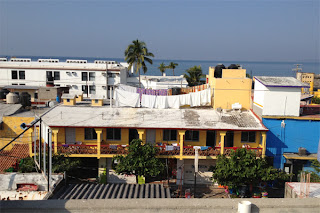 and to show us her solar panels for heating the water for the hotel.  Very cool! 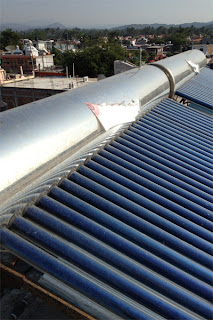 Now Friday morning, we bid farewell to Barre de Navidad and prepared to leave the state of Jalisco, and enter a new state, the state of Colima.