Visiting the Grutas of Cacahualmilpa

Wednesday morning we finally left the magic city of Taxco, after spending six nights there.  Eduardo asked me if I would like to make one more stop in the state of Guerrero, to visit the Grutas de Cacahuamilpa National Park, which is home to one of the largest cave systems in the world.  Although I may have visited small caves in Wisconsin as a child, I can't remember ever being in a large one, so I was excited. 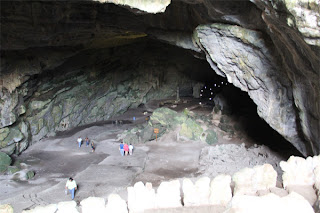 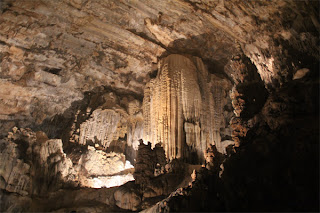 We paid 70 pesos per person (less than $7.00 each), and had a tour guide who led us about one and half miles into the cave.  There were quite a few steps, uphill, and it was a work-out because our guide moved at quite a clip.  Luckily we just spent six days in Taxco walking up and down steps and hills, so we were ready! 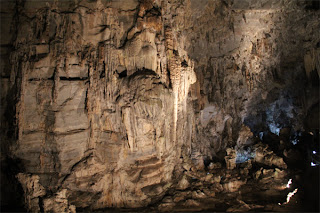 The stalactite and stalagmite formations were towering and dramatic, and would light up as the guide talked about them.  Mostly he would just point out how certain formations resembled animals or people, and talked little of the history of the cave. 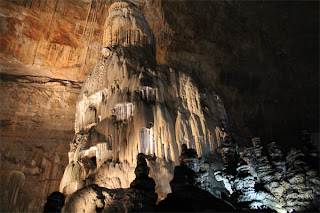 I thought it was interesting that there was a small amphitheater inside the cave, where famous entertainers have performed such as Andrea Bocelli, Paul Mc Cartney, and Lady Gaga.  The acoustics must be just amazing.

I also thought it was interesting that there was a bathroom inside the cave, manned by a person, as is often the case with public bathrooms here in Mexico.  Imagine having the job of sitting outside the bathroom, collecting pesos and handing out toilet paper, in a cave.

This one particular circle in the top of the cave seemed other-wordly to me. 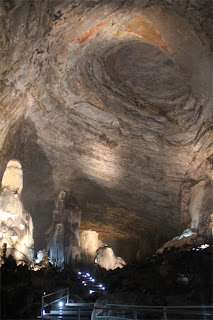 When we reached the one and half mile mark, the tour guide left us, and we were on our own to follow the path back to the entrance of the cave.  It was quiet and dark.  A very interesting experience that I found a little unnerving.  But soon enough, we once again saw the light of day. 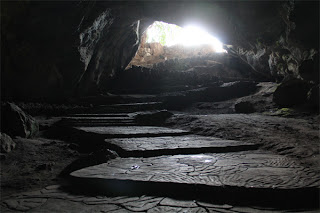 We got back in the car and headed for the state of Morelos, where we would spend Wednesday night in yet another Pueblo Magico, namely Tepoztlan.