The Tortuga Campamento in Michoacan

On Sunday, December 23rd, it would be our last night in Michoacan, because we were expected in Ixtapa on Christmas Eve.  Eduardo knew that I really wanted to find a tortuga campamento (a turtle camp) on the beach, because we had heard there were several to be found there.  He did some research on the internet and suggested we try Ixtapilla first.  Upon arrival, we found a beautiful beach, 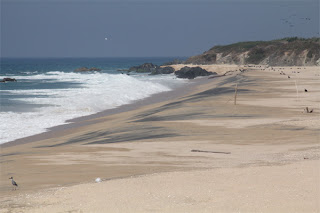 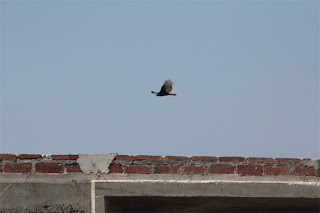 but no turtles.  There was a palapa on the beach with a restaurant, so we stopped to ask the owner about the turtles.  Turns out Ixtapilla is famous for it's turtles, and gets thousands every year, but they arrive in September.  With no turtles in town, the place was a little sleepy.  Even the burros seemed a little bored. 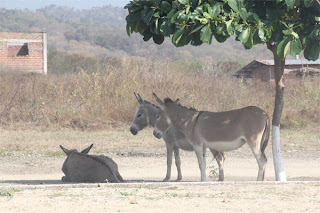 But the owner was so nice that we decided to have lunch there and talk turtles with him. 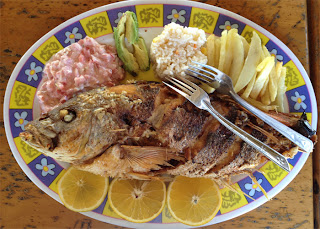 We had a fabulous fish for lunch, and then the owner suggested we try Colola, where they have a different type of turtle that comes up on the beach year round to lay her eggs.  So we got back on the road and headed for Colola, making a brief stop in Faro de Bucerias.

At Faro de Bucerias, we found another gorgeous beach, and took a walk to take a few photos.  The waves were quite large, and the surf was unpredictable, so it seemed like a dangerous place to swim, but the views were breathtaking.  It was practically deserted, except for a single restaurant and a few people camping in tents on the beach. 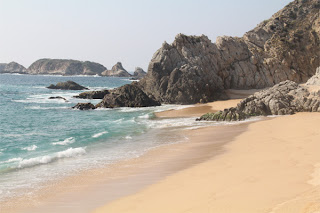 On the way back out of town, there were animals in the road, but not the cows that I've become accustomed to.  This time it was goats! 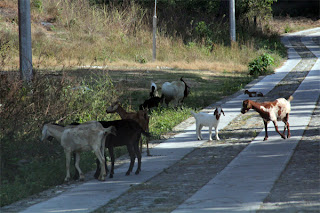 Continuing down the coastal road, we found an entrance to the turtle camp at Colola, which consisted of two small buildings and a couple of volunteer workers from the local high school.  They told us that turtles do arrive there every day, but they only come up on the beach at night, so we would have to come back around 9:00 PM if we wanted to see them.

There are no hotels at the beach, and no hotels down the road in the small town of Colola, either.  So we would have to get a hotel in Maruata, the next town after Colola, which is about a 30 minute drive.  Since it is not advisable to drive in Michoacan at night, we had to think about whether we wanted to come back.  We decided to take a walk on the beach to see what it looked like, and we could actually see the holes that some turtles had dug to lay their eggs.  That was it!  We knew we had to come back at night. 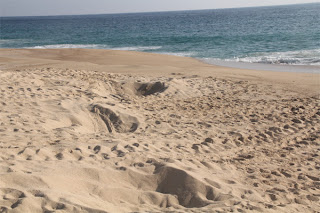 We drove the 30 minutes to Maruata and thankfully were able to get a hotel, as there was only one in town, and quite a few people there.  We took a swim, a brief nap , and got back in the car at about 8:30 PM to go see the turtles.

When we arrived back at the turtle camp, we were told we would have to have a guide take us to the beach, and they put us in the hands of Gabino for a cost of 70 pesos for the two of us (a little over $5.00).   Here I am with Gabino. 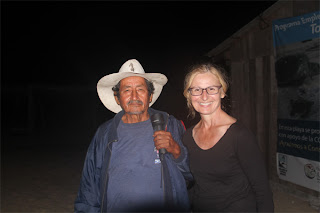 We were the only ones there, so this is clearly another one of those best kept secrets in Mexico.  It was the best 70 pesos we ever spent, because what we saw was amazing.  The beach was like a runway for turtles!  First they come up on the beach and dig a hole. 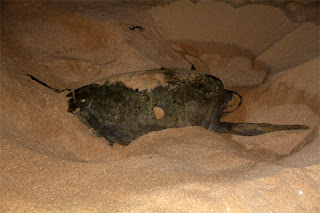 Then they lay their eggs, and cover the eggs with their back flippers. 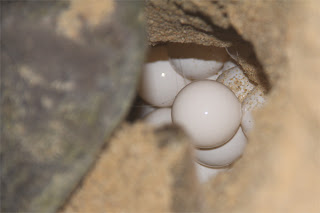 Then they return to the sea.  All in one night.  This picture of Eduardo gives you an idea of the size of the turtles, and you can see at the very bottom of the picture that she has just laid her eggs. 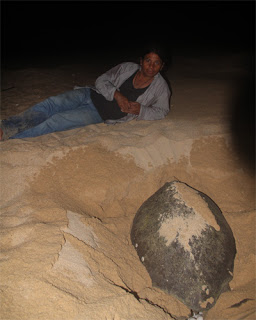 Here I am with a turtle who is returning to the sea after laying her eggs. 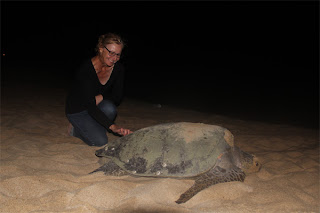 The eggs incubate for a period of 45 days, but since there are turtles coming and going every night, there are also babies hatching every night.  We were fortunate enough to actually have some babies run right past us, finding their way to the sea, so we got to see the whole cycle first hand. 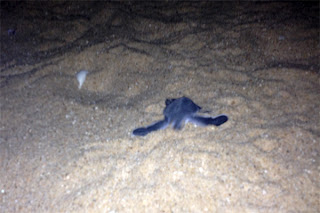 It was close to midnight when we left, and the time had just flown by.  It was such an inspiring experience that we could have stayed there all night, sitting quietly on the sand while the turtles moved all around us going about their business.  We made the 30 minute drive in the darkness back to our hotel, filled with gratitude for what we had just experienced.

Best wishes to you all and Buenas Noches,
Linda